What You Do is Who You Are 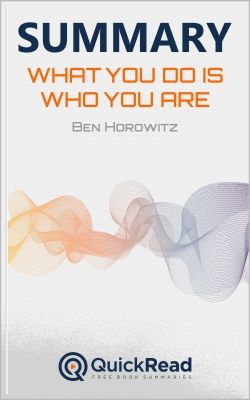 Find out how you can build a company culture that works by turning to history and seeing what you can learn from the world’s greatest leaders. Talk to any business leader and they’ll tell you that company culture is crucial. Creating an environment that people want to work in is essential to any workplace, but how can you accomplish this? As you’ll find out, creating a culture isn’t a new concept, in fact, Ben Horowitz recounts the lessons we can learn from some of history’s most prolific leaders. By focusing on some of today’s most successful companies like Apple, Horowitz also turns back to history and takes a closer look at historical leaders who transformed cultures. Find out how you can build a culture based on the ancient samurai code, what you can learn from a prison gang leader, and how you can define a culture code that works.
--:--
--:--
Download our free app:
Download the book summary:
Download MP3
Download PDF