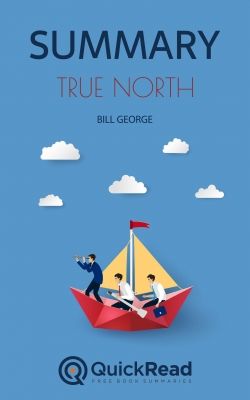 Discover your Authentic Leadership. How do you become an authentic leader? How is it that some people are born natural leaders while others struggle to make the right decisions? Well, Bill George interviewed 125 great leaders and learned that they all share one thing in common: they make the right decisions based on what’s important to them. This might seem vague, so let’s explain. Each leader follows their True North or their internal compass. Your True North represents who you are as a human being, it is the fixed point that helps you stay on track as a leader. It is based on your values, your passions, and your motivations. When you follow your True North, your leadership will be authentic, and people will naturally want to associate with you and follow you. So whenever you feel overwhelmed and as if the world is spinning uncontrollably around you, following your True North can put you back on track. As you read, you’ll learn how to become self-aware, how to set your leadership and ethical boundaries, and whether or not you fall into one of the five archetypal leaders.
Read more
--:--
--:--
Download our free app:
Download the book summary:
Download MP3
Download PDF

"True North" Summary
Font resize:
Summary by Lea Schullery. Audiobook narrated by Blake Farha
Introduction
Discovering your True North takes a lifetime of commitment and learning. As GE’s Jeff Immelt states, “Leadership is one of those great journeys into your soul. It’s not like anyone can tell you how to do it.” After interviewing over a hundred great leaders, like Jeff Immelt, Bill George has discovered that the hardest person you will ever lead is yourself. When you can finally lead yourself through life’s many challenges and difficulties, you will find that leading others becomes pretty straight-forward. In fact, there are six principal areas required to lead yourself.