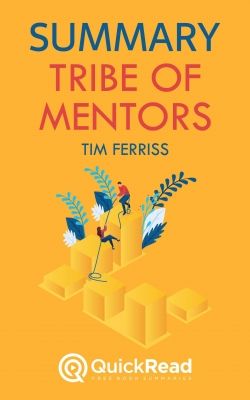 An anthology of wisdom from the best. Have you ever thought it would be nice to have a mentor? What about a team of mentors, one for every avenue of your life? Tribe of Mentors (2017) is your opportunity to have professional life advice in your back pocket! Written as an anthology of Tim Ferriss’ interviews with a variety of highly successful professionals. Ferriss’ interviews delve into their top tips for personal and professional development to help you get ahead of the game.
--:--
--:--
Download our free app:
Download the book summary:
Download MP3
Download PDF

"Tribe of Mentors" Summary
Font resize:
Summary by Alyssa Burnette. Audiobook narrated by Alex Smith
Introduction
Chances are, at some point in your life, you’ve heard about the value of a mentor. Perhaps you’ve been told that it’s crucial to have someone else to guide you on your journey to success, whether your goals are personal, professional, or both. And the author couldn’t agree more! A mentor is someone who’s been where you are, who knows how it feels to start at the bottom and make it to the top. A mentor understands the pitfalls, triumphs, and tribulations you’ll experience along the way and they use their experience to guide you. However, it can sometimes be hard to find the right mentor for you. And that’s why Tim Ferriss took time to interview the best of the best and compile their life advice in one book. You may not be able to get a one-on-one interview with people like Terry Crews, but Ferriss did! And now you get to enjoy the wisdom of that interview in the comfort of your own home. So, over the course of this summary, we’ll take an in-depth look at the life lessons offered by each of Ferriss’ interviewees.
Chapter 1: Discover the Books That Inspire You
What do Jimmy Fallon, Terry Crews, Matt Ridley, and Maria Sharapova have in common? You might scratch your head for a while over this one, but the answer is simpler than you think: they all believe in the importance of discovering an inspiring book. Although they may differ in their choices of reading material, each of these influential people cherish a special book that inspires them and impacts their outlook on life. In fact, each person made the statement that they credit a great deal of their success to the books that have impacted them. So, if you’re curious about the books that inspire the greats, let’s take a look at their reading lists! (Fun fact: Jimmy Fallon and Terry Crews have the same favorite book!)