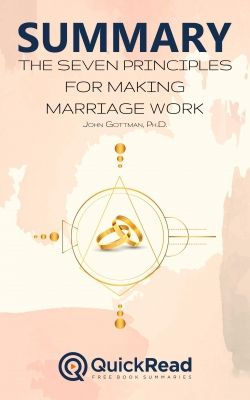 The revolutionary guide for learning the seven principles for creating a happy marriage that will last a lifetime. Divorce statistics are higher than ever. 67 percent of first marriages will end in divorce within 40 years and half of those will occur within the first 7 years. The divorce rate is even higher for second marriages, so it makes sense for couples to put forth the effort into making their marriage work. But how can you ensure your marriage will go the distance? Throughout Dr. Gottman’s Love Lab, Gottman revolutionized the study of marriage by using scientific procedures and observing the habits of married couples in detail over several years. His research methods revealed the key to happy marriages as well as the detriments that lead to divorce. The seven principles outline the path to success as well as tips for effective communication and agreeable compromise.
--:--
--:--
Download our free app:
Download the book summary:
Download MP3
Download PDF

Lastly, remember that marriage is a dance. Sometimes you feel drawn to your partner while other times you need to pull away. Everyone has different needs, some need connection and others need independence. Even if you and your partner have different needs, your marriage can work if you’re willing to put in the time and effort to talk things through.
Chapter 5: Principle Four - Let Your Partner Influence You
As society moves to a more egalitarian culture rather than a male-dominated one, relationships are reflecting this change. It is shown that marriages who value one another equally and allow one another to influence their decisions turn out to be happier and more successful. For instance, one study revealed that when wives express negativity, they typically de-escalate the situation; however, when men express negativity, it often escalates the situation as they often use the “four horsemen” in an argument.
An example of this situation might be when a husband says “You’re not listening to me,” the wife typically responds with “Sorry, now I’m listening.” Whereas if the wife tells the husband that he is not listening to her, he will likely ignore her or get defensive by saying “Yes I am!” He may become critical and say “I never listen because you never make any sense.” Or the husband will display contempt and say something like “This is a waste of my time.” All of these reactions escalate the situation and can create more conflict and tension. These reactions should be avoided by both spouses but men must be aware of how detrimental these reactions are in a marriage.
Marriages where partners accept each other’s influence see success because they understand how to compromise and share their power. Some men openly admit and refuse toshare their power, and while some claim this is due to religion, no religion says a man should be a bully. On the other hand, many men don’t even realize they are struggling to share their power with their wives. Research has suggested that women are much more emotionally intelligent than men, which is true in most cases. Of course, some women can have little or no emotional intelligence as well; however, this research simply proves that men who honor, respect, and recognize their wives’ intellectual strengths are more likely to listen to them.
We can look at the example of Jack. Jack was in the market to buy a used car and took an interest in Phil’s car because it was a good deal. When they met up, Jack told Phil that he promised his wife that he would have it looked over by a mechanic before purchasing it. Phil openly scoffed at Jack's allowance for his wife to have a say in how he should purchase a car. He even stated that he would never have allowed his ex-wife to influence his decision. Jack jokingly wonders aloud if perhaps that’s the reason his marriage ended in divorce. In the end, the mechanic found issues with the transmission, so Jack had his wife’s influence to thank for preventing him from buying a faulty car.
An exercise in seeing how you balance the power of your relationship is to imagine you and your spouse as the only survivors after your cruise ship sinks. You find yourself on a deserted island and decide that you need to survive as long as you need, as well as make sure you are visible for when the search parties come. Gottman provides a list of twenty-six items (which can easily be found by googling ‘Gottman Island Survival Game’). Independently, look over the list and choose the ten you feel are necessary. Then, rank them in order of importance. Next, share your list with your spouse and come to an agreeable list of ten. Play an active role in this conversation and make the final decision together. Once completed, evaluate how the game went and if either of you is having trouble accepting the other’s influence. If there is, it’s best to acknowledge the problem and talk it over.
Chapter 6: Principle Five - Solve Your Solvable Problems
Conflicts arise in every marriage, if they don’t, then you’re simply lying to yourself. Marriage involves the merging of two unique individuals, so it’s unrealistic to think that spouses will agree in every situation. In every marriage, there are two types of conflicts. Those that can be resolved or are solvable, and those perpetual or ongoing conflicts. In fact, 69 percent of marital conflicts fall under the perpetual or ongoing category. The five main ongoing conflicts include: