The No Asshole Rule 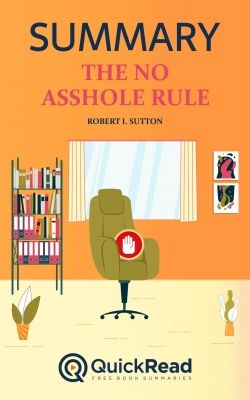 Building a Civilized Workplace and Surviving One that Isn’t How do you react when you meet a mean-spirited person? If you’re anything like author Robert Sutton, you probably think: “Wow, what an asshole!” Maybe you call them something else, like bullies, creeps, jerks, tyrants, or egomaniacs. But overall, asshole seems to best capture the fear and loathing you have for these nasty people. Unfortunately, most of us have to deal with assholes in the workplace, and Sutton aims to show how destructive these people are to their colleagues and organizations. You’ll learn how to keep these types of jerks out of the workplace as well as how to handle the ones you are stuck with. As you read, you’ll learn the total cost of assholes in business, why emotionally distancing yourself is key, and how sometimes being an asshole can be effective.
--:--
--:--
Download our free app:
Download the book summary:
Download MP3
Download PDF

"The No Asshole Rule" Summary
Font resize:
Summary by Lea Schullery. Audiobook narrated by Alex Smith
Introduction
The No Asshole Rule began more than fifteen years ago when Sutton was in a faculty meeting at Stanford University. When discussing who they should hire as a new faculty member, a fellow colleague simply stated, “Listen, I don’t care if that guy won the Nobel Prize… I just don’t want any assholes ruining our group.” They all had a good laugh, but whenever they had similar discussions in the future, it always went back to “The candidate seems smart, but would this hire violate our no asshole rule?” The rule went on to make the department a better place. You see, nasty people can be found in every occupation and in every country, but there is something you can do about it. Sutton hopes that what you learn here will provide comfort for those who feel oppressed by the jerks you work with, serve, or struggle to lead. He also hopes he can provide you with practical ideas for driving out and reforming nasty people, or even just limiting the damage they do if they are unable to reform.
Chapter 1: Certified Assholes Versus Temporary Assholes
At just twenty-nine-years-old, author Robert Sutton began working at Stanford as a researcher. When he arrived, he was inexperienced, ineffective, and extremely nervous. Naturally, he got poor teaching evaluations during his first year on the job, but he continued to work hard to become more effective in the classroom. By the end of his third year at Stanford, he won the Best Teacher Award in his department. Voted for by the students, Sutton relished in the delight of his accomplishment. However, that feeling didn’t last long.
Immediately following the graduation ceremony, a jealous colleague came rushing up to him to offer a congratulatory hug. During that hug, she aimed to extract every ounce of joy that Sutton was experiencing by whispering, “Well, Bob, now that you have satisfied the babies here on campus, perhaps you can settle down and do some real work.” We can use this memory to demonstrate the two tests that Sutton uses for determining whether a person is acting like an asshole.

In this particular interaction, that lasted less than a minute, Sutton went from feeling the happiest he’s ever felt about his work performance to worrying about whether or not a teaching award was a sign that he wasn’t serious enough about research. This interaction also shows the many types of assholes there are in the workplace. Some assholes loudly insult and belittle those who they believe are lesser than. Others, like Sutton’s colleague, are two-faced backstabbers who keep a good reputation and save their dirty work for moments in which they can’t get caught. This type of asshole is much more damaging and even tougher to stop.
Additionally, this interaction also helps to demonstrate the difference between a temporary asshole and a certified asshole. It would be unfair to call his colleague a certifiedasshole based on this one interaction. Instead, she would be considered a temporary asshole; something we might all be guilty of at some point. For instance, Sutton once became angry with a staff member who he (wrongly) believed was trying to take an office away from the group. He admits to being a jerk in that situation. To be a certified asshole, one would need to display a persistent pattern of belittling, humiliating, disrespecting, and oppressing others.
Chapter 2: The Total Cost of Assholes
There are many ways in which assholes will try and demean and deflate their victims. Some use personal insults, others aim to shame or make jokes, some even treat people as if they are invisible. There are hundreds of other moves assholes can use that leave victims feeling attacked and diminished, even if only momentarily. The twelve common everyday actions that assholes use are what Sutton calls the “Dirty Dozen.” They are: