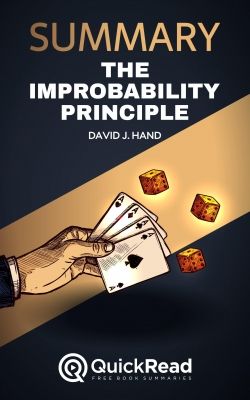 The science behind miracles. Have you ever encountered something so striking that it made you say, “That’s a miracle!” Or perhaps you’ve experienced a phenomenon that makes you feel as though it’s too extraordinary to ever happen by chance. But the research of professor and statistician David J. Hand indicates that what we consider miraculous is actually both ordinary and easily predicted according to something called the improbability principle. This book unpacks the science and statistics behind seemingly miraculous phenomena.
--:--
--:--
Download our free app:
Download the book summary:
Download MP3
Download PDF

"The Improbability Principle" Summary
Font resize:
Summary by Alyssa Burnette. Audiobook narrated by Alex Smith
Introduction
If you’ve ever watched any of the Marvel superhero movies, you might have heard about something called “the butterfly effect.” Although the butterfly effect wasn’t invented by the creators of Marvel (it’s actually part of a larger scientific principle called “chaos theory”) it suits the Marvel universe well because it demonstrates that one seemingly insignificant decision can have a ripple effect that changes the outcome of your entire future — and potentially affects the lives of others. For example, let’s say that you meet a charming stranger in the lobby while you’re waiting for your dentist appointment. You guys flirt a bit and maybe even exchange contact info. The next decision in front of you — whether or not you choose to go on a date with that person — can impact the course of your future.
Maybe that was the person you were going to marry. Maybe you would have felt that on the first date and the two of you would live happily ever after. Your future happiness, your decisions, the births of any children you might have all depend on you choosing the path that creates that version of your life story. But let’s say that was the person you were meant to marry… and you didn’t go out with them. Your life then takes a different direction — one in which you miss out on all that future happiness and those children — as a result of that one small decision. This just goes to show that our decisions — even those which we think might be dependent on chance — are actually the result of easily explainable scientific principles.
And the same is true of miracles. That’s why the author wants to explain that what we might consider “miraculous” or under the domain of the supernatural is actually an easily explainable phenomenon if we simply have the right information.
Chapter 1: Ordinary Miracles
We tend to use this phrase to characterize events which happen all the time but which strike as incredible in nature — things like the birth of a child or nature in bloom or blossoming new relationships. But the author remarks that knowledge of what he calls the improbability principle renders the term “ordinary miracles” universally accurate. This means that the bigger and more astounding phenomena — the sort about which we remark, “That was a once in a lifetime chance!” — are actually more likely than we think. Even if they have a shockingly low rate of probability, the occurrence of these events are still actually commonplace. If that sounds unbelievable, just consider these examples of highly unlikely coincidences that really happened!