The Genius of Opposites 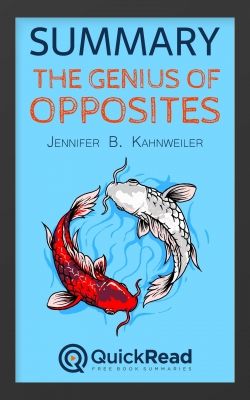 The Genius of Opposites (2015) provides a refreshing new take on the old saying “opposites attract” and invites us to consider the innovative partnerships that can be forged when introverts and extroverts learn to work together. Jennifer B. Kahnweiler’s revolutionary theory explores the genius of combining two seemingly incompatible personality types: introverts and extroverts. Exploring case studies of successful (and hopelessly doomed) partnerships comprised of opposites, Kahnweiler provides a five step strategy called the “ABCDE method” that will teach readers to accept differences, resolve conflicts, and celebrate the potential of others to create amazing partnerships.
--:--
--:--
Download our free app:
Download the book summary:
Download MP3
Download PDF

"The Genius of Opposites" Summary
Font resize:
Summary by Alyssa Burnette. Audiobook narrated by Blake Farha
Introduction
Would you describe yourself as an introvert or an extrovert? If you’re not sure, it’s worth taking the time to figure it out because understanding which end of this spectrum you identify with can have a huge impact on your personal and professional success! In fact, your success just might be determined by the opportunity to partner up with someone on the opposite end of the spectrum! Although you might think it would be easier to work with someone who’s just like you, this summary will show you how the old adage “opposites attract” can actually lead to remarkable innovation. So, keep reading, because in this summary, you’ll learn: