The Future of Professions 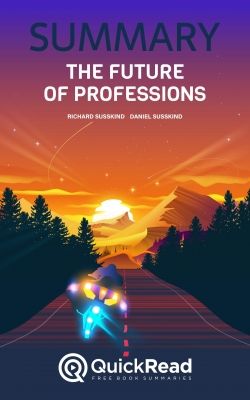 Richard and Daniel Susskind lay out their vision of a future in which expert knowledge is shared and distributed, and the role of the specialized professional becomes antiquated. Authors Daniel Susskind and Richard Susskind examine the professions that they predict will be eliminated in the near future, and what technologies and systems will replace them. They argue that the role of doctors, CPAs, teachers, lawyers, priests, and many others will either become obsolete or radically transformed.
--:--
--:--
Download our free app:
Download the book summary:
Download MP3
Download PDF

"The Future of Professions" Summary
Font resize:
Summary by Nicolas Stewart. Audiobook narrated by Alex Smith
Introduction:
The Future of the Professions explains how 'increasingly capable systems' such as software and search engines are making many professions obsolete. Why pay for a mechanic to change your oil or fix your fuel filter when a quick google search can find you video tutorials on how to do so yourself?
What happens in AI software is able to diagnose 100 patients more quickly and accurately than a human doctor is able to diagnose one? What is the point of law students memorizing hundreds of court cases when they can look them up in an instant?
The authors assert that many professions today only exist because their knowledge has historically been obscure. You had to go to expensive colleges to have access to the information that today anyone and everyone can access for free. And because of this those professions are becoming no different than the role of the clergy prior to the reformation, i.e. artificial monopolies on information that are becoming obsolete as that information becomes monopolized.
Chapter 1: Professionals Are Given A Monopoly Over Their Field In Exchange For Their Expertise
The defining characteristic of what constitutes a profession is that it’s specialized. A specific and particular area of knowledge and skills and the professional is an expert in. Someone who knows a lot about one thing rather than a little about many things.
The authors distinguish a profession from an occupation as having 4 characteristics:

These steps will be driven by technological innovation and the growing body of knowledge and expertise stored electronically. Access to this expertise will decrease the autonomy and monopoly currently held by professions and increasingly be held by consumers.
Society will increasingly accept and expect services previously offered by humans to be carried out by machines and computers.
Chapter 6: The Value of Knowledge Increases as it Spreads
“In all of these illustrations the historical monopoly of traditional teachers, tutors and lecturers is challenged. There is less need for the ‘sage on the stage’ and more of a job for ‘the guide on the side’…There are new roles and new disciplines, like education software designers…content curators… and data scientists.”
In some ways education is the field most revolutionized by these changes. Information has become democratized to a degree never before possible with resources such as