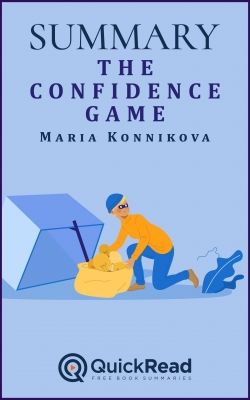 The Confidence Game (2016) lays bare the psychology behind pyramid schemes, get-rich-quick scams, and every other con artist trick in the book to help us understand why we so easily fall prey to manipulators. If you’ve ever wondered why we fall for con artists or even why we can be easily manipulated by others in everyday life, The Confidence Game has the answers. Drawing on examples from psychology and history, Maria Konnikova explains why confidence can create a master manipulator or a victim, why we’re attracted to successful people, and what’s wrong with our self-perception.
--:--
--:--
Download our free app:
Download the book summary:
Download MP3
Download PDF

"The Confidence Game" Summary
Font resize:
Summary by Alyssa Burnette. Audiobook narrated by Alex Smith
Introduction
Have you ever read headlines of such notorious scams as the Bernie Madoff scandal and thought, “How can people be so stupid! I would never fall for that!” But have you ever considered that that’s probably just what those con artists’ victims used to think? Because the truth is, everybody has a weak spot that can be exploited; yours just might be different from someone else’s. Fortunately, however, by learning about the personal and psychological weaknesses con artists manipulate, you can understand how they operate and how to keep yourself safe. And that’s what you’ll learn through the course of this summary!
In fact, whether you want to protect yourself or maybe learn how you too can influence people to do what you want, this summary will analyze the steps that tricksters take. (Although we really hope you won’t use this advice to steal anybody’s life savings. That’s not cool). So, let’s take a look at these next few chapters together and learn how: