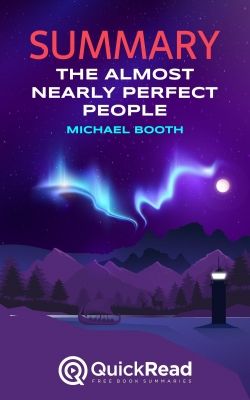 The Almost Nearly Perfect People (2014) is author Michael Booth’s exploration of the cultural belief that Scandinavia is a cultural utopia. Examining our fascination with everything from IKEA to Spotify, Booth takes readers on a journey through the content to deconstruct our misconceptions and ground our fascination in a bit of realism.
--:--
--:--
Download our free app:
Download the book summary:
Download MP3
Download PDF

"The Almost Nearly Perfect People" Summary
Font resize:
Summary by Alyssa Burnette. Audiobook narrated by Alex Smith
Introduction
For hundreds of years, Scandinavia has been considered a haven of almost surreal beauty and perfection. Boasting such national treasures as IKEA, Greta Thunberg, and Viking history, it’s easy for us to imagine it as a utopia of peace and progress. But is it really as flawless as we think? Michael Booth wanted to challenge this stereotype, so he took it upon himself to explore all five Nordic countries — Iceland, Sweden, Norway, Denmark, and Finland — to learn more about how our views of Scandinavia originated. So, in this summary, we’ll explore Booth’s findings and learn: