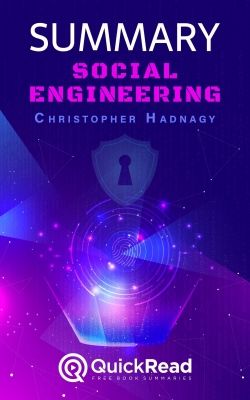 Discover the art of human hacking and how to protect yourself from attacks on your personal information. Con artists and thieves surround us every day, they steal personal belongings like our wallets, cell phones, and valuable jewelry. But the most malicious thief is that of a social engineer who is after something far more valuable - your personal information. A social engineer doesn’t simply hack your computer, instead, a social engineer will gain your trust and manipulate you into revealing the information needed to hack your bank accounts, company software, and more. A simple phone call or conversation can reveal all a social engineer needs to know to hack your passwords and steal your identity or the identities of thousands. In Social Engineering, you’ll learn invaluable insight into the methods used to break seemingly secure systems and expose the threats that exist from a professional social engineer who uses his skills for good. You’ll learn how all information is valuable to an attacker, the tactics social engineers will employ to con their victims, and lastly, how to protect yourself from malicious social engineers.
Read more
--:--
--:--
Download our free app:
Download the book summary:
Download MP3
Download PDF

Essentially, human nature is what makes elicitation work so well. For instance, Hadnagy recalls a time in which he was tasked to gather intel on a company and met his target at a local networking event. He approached his target at the bar and opened with “Escaping from the vultures?” His target chuckled and ordered a drink. Hadnagy then introduced himself and pulled out a business card, his target replied by doing the same, stating “I am the CFO for XYZ.” Hadnagy then commented on the successful product that the target’s company just released, the target then began boasting and telling more about the company.
Soon, the two were conversing over drinks, and Hadnagy discovered some key information that would help him infiltrate the company building. In addition to getting the names of higher-ups and when they would be on vacation, he also found out the accounting software they used as well as the door locking security. Therefore, Hadnagy was able to plan an onsite visit to repair a “faulty” security box and time clock. By dropping names to the receptionist and giving a reason to be there, he was given access to the building in a matter of seconds without ever being questioned.
Elicitation led Hadnagy to success and didn’t allow the receptionist to ever doubt his pretext. All it takes is a simple, light conversation to get some of the best information out of many people. Of course, you’ll need to learn the art of conversation which can be achieved by understanding these three key steps: Be natural, educate yourself, and don’t be greedy. In other words, have confidence and ensure your stance and posture reflect that confidence. Nonverbal aspects are just as important as the conversation itself. Next, you must have knowledge of what it is you will be talking to your targets about, and never pretend to know more than you do.Lastly, you must be willing to share and give information. No one likes to be bombarded with a bunch of one-sided questions, so keep the conversation moving and offer your own ideas.
In fact, mastering elicitation means learning how to ask the proper amount of questions. Too many questions can shut down the target, whereas too few will make the target feel uncomfortable. Additionally, ask only one question at a time to avoid overflowing the target. Remember, you are merely gathering information to build a profile, to do this you can’t seem too eager or uninterested.
Chapter 5: Understanding How Your Target Thinks
What if I told you that one of the most important skills of a social engineer is the ability to read minds? You likely wouldn’t believe me, reading minds is impossible...or is it? Well, learning how to analyze a person’s cues they give in their speech, gestures, eyes, and faces can be just as effective as reading their minds. The first step in becoming a “mind reader” is building a rapport with your target and gaining their trust. So how can you do this?
First, you’ll need to understand the way people think and in what modes they think. While you may be thinking that this sounds like a job for a psychologist, it’s actually much easier than it sounds! According to Hadnagy, we mainly refer to three senses in conversation: