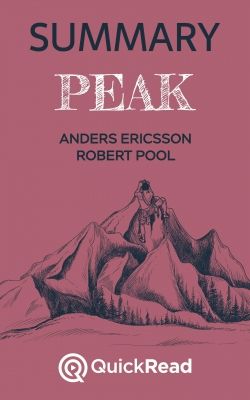 Learn about the science that will help you to unlock your full potential. How would it feel to reach your peak potential? How would you like to unlock your optimum performance? Peak (2016) argues that your potential isn’t determined by your genetics, your environment, or your experience and demonstrates that you can reach the peak of your potential by implementing a few key strategies.
--:--
--:--
Download our free app:
Download the book summary:
Download MP3
Download PDF

So, if you want to develop your skills as a singer, actor, or musician, these are the core training techniques you want to keep in mind. That’s because it’s not enough to say, “I want to be the next Taylor Swift.” In addition to being ambiguous and vague, this goal doesn’t really lay out any clear steps that will help you get there. But if you establish a clear goal, like saying, “I want to master the guitar,” that’s a great starting point that will help you reach your overall goal of becoming a singer/song-writer. However, you can’t set those goals without being willing to branch out from your comfort zone. Learning new things always involves taking risks and being open to the possibility of failure. So, even if you’re afraid of looking silly or making mistakes, it’s important to open yourself up to that opportunity so you can learn and grow! And last but not least, it’s critical that you get consistent feedback.
Just as it’s dangerous for us to bottle up our emotions and avoid sharing them with others, it’s also unhealthy to avoid feedback on our new ventures. For example, if you think you sound just like Taylor Swift, but everyone else thinks you sound like a dying cat, it might be best to get that feedback before you try out for American Idol. But feedback can serve other helpful purposes too. Someone who cares about you and has your best interest at heart — and who (ideally) is also an expert in what you’re trying to master — will be able to tell you how you’re doing. They can encourage you to keep trying and coach you in the areas where you need to improve. They can help you identify your strengths and weaknesses. And you’ll benefit from having a sounding board to help you judge your progress! But this feedback needs to be consistent because we never stop growing, never stop learning, and never stop needing support. So, when we have that system of guidance and support in place, we can flourish!
Chapter 4: From Good to Great
What’s the difference between a good and a great performance? That’s what we want to know, isn’t it? Because after all, this book isn’t called “unlock your slightly above average performance” or “learn how to do an okay job.” Instead, it’s about unlocking your peak potential. So, what does that look like? And what makes the difference? The answer lies in taking your purposeful practice to the next level through something called “informed practice.” It’s also known as “deliberate practice” and this sums up a big partof the difference because it requires you to be intentional about meeting your goals. Let’s take a look at how that works.
A well-developed field is one necessary ingredient for informed practice. That means that you’re pursuing a skill in a field that has been around for awhile, been the subject of considerable study, and has a few established experts. This is necessary for the second vital part: finding an expert mentor who can guide you. As you can see, these elements build on the tenets of informed practice and take them one step further. And the best part is that you can apply them to pretty much any field! Whether you hope to become an actor, a singer, a best-selling author or a leading scientist, most of the fields you could want to go into are already established and have a number of talented, credible experts.
Experts are crucial for deliberate practice because their experience can provide you with an action plan for becoming an expert yourself. To put it in context, just imagine what an aspiring basketball star could learn if his coach was Michael Jordan! The advice and encouragement of a mentor who is an expert in your field will be so much better for you than a sounding board comprised of ordinary people who don’t know much about what you’re trying to do. For example, if your grandma thinks everything you do is awesome and always encourages you no matter what, she’s probably not going to be as helpful as a coach with fifty years of experience who can skilfully evaluate your progress. And to top it all off, a knowledgeable coach can also serve as a springboard for launching your dream career because they’ll be able to give you insider info on how to step up your game. After all, why waste your time reading “How to Write the Great American Novel (For Dummies)” when you could get firsthand tips from Stephen King?
Chapter 5: Final Summary
While it’s true that some people are innately talented, talent isn’t the key to success — deliberate practice is. Although we often assume that the realm of success is populated only by those who were born with superior talents, the author wants you to know that that’s simply not true. Talent doesn’t account for success, but practice, determination, and hard work can. That’s because being good at something can only get you so far. Without developing your skills and investing time and effort, no amount of talent can help you achieve success.
Instead, deliberate practice is the key to unlocking your peak potential and you can do so by following a few key strategies. As we’ve seen through the examples of the children in the Tokyo music school and the London cabbies, our brains are malleable.And if we devote ourselves to establishing clear goals, branching out from our comfort zones, and getting consistent feedback from an expert in our field, we can develop new skills and make the transition from good to great.