No Self, No Problem! 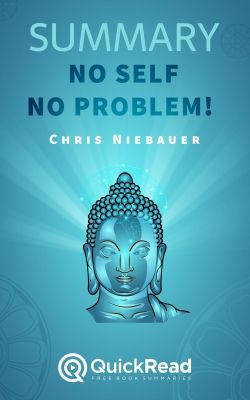 Buddhism posits that there’s no such thing as one continuous self. No Self, No Problem (2019) draws on recent psychological research to show how modern psychology actually affirms this core tenet of Buddhism as scientific truth. Blending neuroscientific data with the foundational principles of Buddhism, Chris Niebauer presents evidence that our sense of self is, in fact, part social construct, part delusion. Offering examples of research which confirms that our concept of the self is merely a mirage generated by the language centers of our brains, Niebauer destabilizes our understanding of ourselves and asks us to question how self-improvement works if there is no such thing as one concrete, stable self.
--:--
--:--
Download our free app:
Download the book summary:
Download MP3
Download PDF

"No Self, No Problem!" Summary
Font resize:
Summary by Alyssa Burnette. Audiobook narrated by Blake Farha
Introduction
Everyone always tells you to “just be yourself.” But what if you don’t know who that self really is? More confusing yet, what if there’s no such thing as your “self?” If that strikes you as the wackiest thing you’ve ever heard, you’re not alone! Almost all of Western philosophy centers on the concept of the self, including such notable ideas as Rene Descartes’ seventeenth century assertion, “Cogito, ergo sum — I think, therefore I am.” Descartes believed that humanity is defined by thinking and this in turn implies a stable, continuous self. Although the person we are may grow, develop, and change throughout our lifetime, we at least accept that there is one definitive sense of “I” rather than multiple shifting versions of ourselves.
But does that singular “I” really exist? Where Western philosophy explicitly affirms that it does, Eastern philosophy posits that there is no singular sense of self and that al; human suffering can be attributed to the illusion that there is. That might sound pretty trippy, so bear with me, because this summary will show you how modern neuroscience is actually affirming this tenet of Buddhist philosophy. Through the course of this summary, you’ll learn: