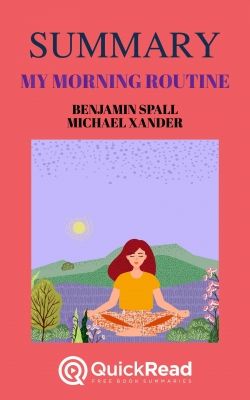 Written for anyone who feels like sleep is a drug, their bed is their dealer, and their alarm clock is the police, My Morning Routine (2018) will teach you how to optimize your morning routine for a successful start to the day. Crafted through the authors’ interviews with 64 of today’s most successful people, My Morning Routine examines the common denominator that all successful people have in common: a solid morning routine. By providing practical tips for eliminating the bleary-eyed stress of your morning, Spall and Xander prove that mornings don’t have to be traumatic and you don’t have to be a natural early bird to get your day off to a successful start.
--:--
--:--
Download our free app:
Download the book summary:
Download MP3
Download PDF

"My Morning Routine" Summary
Font resize:
Summary by Alyssa Burnette. Audiobook narrated by Blake Farha
Introduction
What does your morning routine look like? If you’re like most of us, you probably don’t bound out of bed first thing in the morning, feeling refreshed and positive like all those people in commercials advertising the next great way to get your best night’s sleep. Instead, you probably play a game of whack-a-mole with your alarm, hitting “snooze” five times before realizing you’ve definitely cut it too close and you’re about to be late. Or maybe you lay in bed and scroll through your social media for a few minutes before you actually get up. But one thing’s for certain, whether your mornings are lazy or frenetic, most of us aren’t getting off to our best start. But wouldn’t it be nice if you could? Wouldn’t it be great if you had a morning routine that left you feeling energized and full of creativity?
Well, by following Spall and Xander’s morning life hacks, you can! And the best part is that their system doesn’t advocate a set of immovable rules that you have to follow dogmatically. Instead, it recognizes that everyone is different and we need the ability to craft an individualized morning routine that suits our unique needs. So, by taking examples from their interviews of 64 of the world’s most successful people, Spall and Xander bring you the best practices they learned from authors, artists, Olympic athletes, and everybody in-between! And through this summary, we’re going to learn: