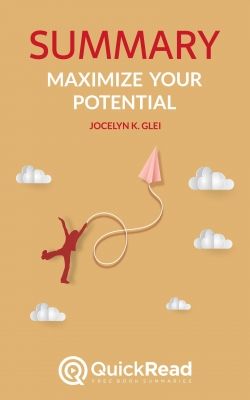 In Maximize Your Potential (2013), you’ll learn how to succeed by making the most of the talents and skills you already possess. Written for those who have often felt that they’re not talented enough or lack the skills to succeed, Maximize Your Potential teaches that your success isn’t determined by having a particular skill set, it’s about making the most of the talents you have. Through the combination of actionable advice and examples from some of the world’s most productive people, Jocelyn K. Glei’s guide will show you the secret for unlocking your potential.
--:--
--:--
Download our free app:
Download the book summary:
Download MP3
Download PDF

"Maximize Your Potential" Summary
Font resize:
Summary by Alyssa Burnette. Audiobook narrated by Alex Smith
Introduction
“Follow your passion.” At some point in your life, you’ve probably been told something along those lines. And although it sounds easy enough, those of us who are more realistic understand that it isn’t always that simple. Because being a rock star might be your passion, but following that dream probably won’t be enough unless you have some serious musical talent to back it up. But on that note, you’ve probably also learned that possessing a natural talent for something makes it easier and more enjoyable. As such, you might often find yourself wishing that you could turn your talents or favorite hobbies into a career. And although you might not become the next Ozzy Ozbourne, that might be easier than you think!
That’s because maximizing your potential is all about making the most of your natural talent and passions. So, whether your “thing” is math, baking, or art, in this summary, we’ll take a look at the easy steps anyone can take to maximize their potential. And by applying the insights of leading influencers like Cal Newport and Joshua Foer, you’ll learn: