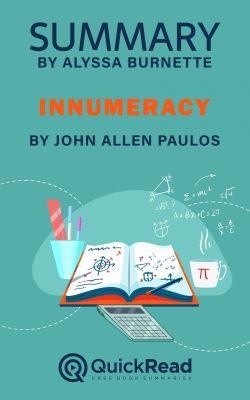 Learn about the mathematical equivalent of illiteracy. Would you consider yourself to be “afraid” of math? Did you spend most of your time in school wondering when you would ever “need” algebra? Do you prefer to let a calculator do most of the work for you? If you answered yes to any or all of these questions, you’re not alone! Many people have an aversion to math and this intentional escape from mathematics is called “innumeracy.” Just as illiteracy is the inability to read, a lack of proficiency with mathematics is called innumeracy. Innumeracy (1988) explores this phenomenon and its impact on humanity.
--:--
--:--
Download our free app:
Download the book summary:
Download MP3
Download PDF

In an interview with the magazine Psychology Today, Spiegelhalter explained that he “believes that coincidences are best understood as interesting examples of the laws of probability at work. For example, the probability of two people having the same birthday is 1/365, which means that if you tell 365 people when your birthday is, you are very likely to find at least one person who shares the same birthday. Vacation-related coincidences tend to involve unexpectedly running into someone you know. Since you probably know a great many people and you are part of a specific socio-economic group that is likely to take vacations in the same places, the probability of running into someone you know is also fairly high.”
So, if you’re not very comfortable with math, you might assume that each of these coincidences are uncanny and delightful surprises. But as you can see from these examples, they’re actually very common! In this respect, it is evident that innumeracy can alter our perception of events and of the world around us.
Chapter 3: Why Astrology is a Pseudoscience
Recently, my friend has become obsessed with something called “angel numbers.” Every time she happens to pick her phone up and see matching numbers, she posts about it on Instagram, convinced that it means something. For example, this happens every time her phone clock lands on a number like “10:10,” “11:11,” “12:12,” or “2:22.” She refers to these as “angel numbers.” A quick glance at a website called “Angel Numbers.com” explains that “angel numbers are a sequence of numbers that hold a special message from your guardian angels. Each angel number's meaning can bedeciphered by looking at the numbers within the sequence, and the order in which they are arranged. Seeing these number sequences is not just a random event; it is a method in which the divine often communicates with you.
The spirit world is thought to operate through symbols, number synchronicity, and seeming coincidence. Divine beings do not typically communicate directly with humans but leave clues in our path indicating that the universe has a message for us! These special messages of divine guidance are our Guardian Angels or Angelic helper beings trying to give you an important sign or wake up call. When you are vibrating with the frequency of the Angels you will be more open to receiving and noticing the universal information that is present to you.” Now, chances are, you’ve come to the end of this paragraph and concluded that this is utter nonsense. No one “vibrates with the frequency of the Angels” and it means absolutely nothing when your phone clock hits “10:10.” But my friend — and many other people — genuinely believe it!
Why? Because, on the surface, it sounds like it makes sense. If you suffer from innumeracy, you might be easily taken in by concepts that sound serious and mathematical. And I have to admit that, as someone who is also uncomfortable with math, “number synchronicity” really sounds like it means something! You may have noticed the fact that this pseudoscience also draws on the power of coincidence. By its use of the phrase “seeming coincidence,” it insinuates that everything happens for a reason. In so doing, it taps in to our common misperception of coincidence and invites us to believe that coincidences really occur because of the hand of fate. Of course, as you’ve already seen through the author’s explanation, this is every bit as nonsensical as one might assume. It’s also a great example of how pseudoscience preys on innumeracy.
Angel numbers are only one example of astrology, a popular pseudoscience which encompasses everything from your “star sign” to your “angel numbers.” And although many more people believe in horoscopes than in angel numbers, the sad truth is that they are both equally wrong. Your star sign is said to reflect the position of the sun at the time you were born. This position — and its subsequent gravitational pull — is meant to explain your personality, your character, your values, and your mood swings. By understanding your star sign, people believe that you can cultivate a deeper knowledge of yourself. This in turn is meant to enhance your life and your relationships.
But sadly, astrology is a ruse just like any other run-of-the-mill trick that con artists use to deceive people. There is no mathematical or statistical evidence to support it. In fact, the position of the sun at the time of your birth has absolutely no effect on your present personality traits! And despite the perception that the gravitational pull of the planets must guide you toward certain stars or character traits, this is absolutelyuntrue! But because it sounds like it’s grounded in real, mathematical principles, people commonly fall for it. Even if we don’t understand math, we understand that numbers are true and infallible. A person might lie or make a mistake or be influenced by extenuating circumstances. But the same cannot be said of numbers.Your mood might change if you have a bad day, but 2 + 2 will always be 4, even if the numbers were having a bad day! As a result, you can plainly see that innumeracy can be a severe handicap that causes you to believe blatant untruths.
Chapter 4: Final Summary
Innumeracy is the mathematical equivalent of illiteracy. But although people are embarrassed of being unable to read, many people happily flaunt their innumeracy. That’s because our society perpetuates the perception that a lack of numerical competence is not a handicap. But as the author’s examples illustrate, innumeracy can affect us in more ways than one might assume! Our inability to understand basic mathematical principles can cause us to fall prey to pseudoscience, misunderstand statistics, and alter our life choices as a result of misperceptions. That’s why the author believes that everyone should have the mathematical competence to make sound life choices.