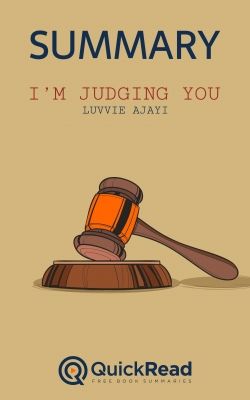 I’m Judging You (2016) is author Luvvie Ajayi’s humorous perspective on all of society’s worst foibles. Covering everything from breaking the unwritten rules of social media to sexism and racism in their most repugnant forms, Luvvie Ajayi is judging it all and she wants readers to know. By calling out these mistakes through a combination of wit and criticism, Ajayi offers some humorous and helpful tips for improving your reputation in society.
--:--
--:--
Download our free app:
Download the book summary:
Download MP3
Download PDF

"I’m Judging You" Summary
Font resize:
Summary by Alyssa Burnette. Audiobook narrated by Blake Farha
Introduction
Luvvie Ajayi is a sharp, funny lady; that’s the primary reason you should want to listen to her opinions. In fact, in her career as a humor writer, she’s even attracted the attention of Shonda Rhimes, creator of the hit TV series Scandal with her humorous weekly recaps of the show. But as this book will show you, Ajayi has so much more to offer than funny reviews of binge-worthy television. And she has a lot to say about social media, women’s rights, and discrimination against people of color in America. So, in this summary, we’ll take a look at the world through Ajayi’s eyes and explore her thoughts on: