How to Be Fucking Awesome 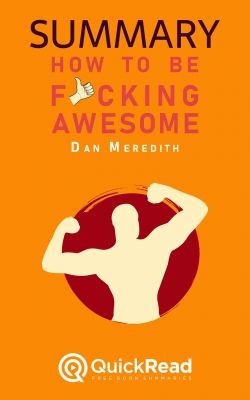 Discover the secrets to success from successful fitness coach, copywriter, influencer, and business owner, Dan Meredith. Monday mornings. “Sunday scaries.” What does this all mean? If you’re tired of working the Monday-Friday grind and experiencing the “Sunday scaries” in which you dread the thought of waking up to go to work the next morning, then it’s time to make a change. Dan Meredith felt this way at one point too. He’d be shattered each Monday morning as his alarm clock forced him awake to go to a job that he hated. He lived life sitting in an office, slowly going insane, making someone else money while his life slipped by. So at thirty-three-years-old, he finally said, “f*ck it!” He stopped making excuses and searched for the secret of success, longing for the lifestyle of the rich and famous. Now, he’s here to teach you just how he did it. How he went from maxing out every single credit card bill he had to running a fully automated fitness facility and a successful copywriting business. He went from barely affording pizza to hosting sold-out events with some of the biggest names in the world of entrepreneurs. So how did he do it? Keep reading to find out the secrets to success, including why being selfish is a good thing, or why you should begin taking train trips to nowhere.
Read more
--:--
--:--
Download our free app:
Download the book summary:
Download MP3
Download PDF

Before he goes through his ranking system, Meredith does what he calls a “brain dump,” in which he writes or types out all the tasks he wants/needs to do. He then highlights all the 1s and schedules only 3-5 tasks each day from Monday to Friday. If he has space, he adds in some 2s or 3s, but that’s it! If you struggle to transition from one activity to another, perhaps try planning out your days based on a theme. Monday might be planning, Tuesday coaching, Wednesday meetings, etc.
Lastly, establish a routine. This is perhaps one of the most important parts of staying productive and the first hour of your day is the most important. Meredith advises to not, “fuck around on Facebook or check your emails. Get yourself in the right frame of mind to start the day. By doing this you’re going to be in a more focused mood to get shit done during the day.”
Chapter 6: The Importance of Like-Minded People
One of the worst things you can do when embarking on your journey towards awesomeness is to surround yourself with people who don’t understand you. According to Meredith, “There’s no point hanging around lazy fucking people who are unhappy with their soul-sucking jobs, only waiting until the weekend to numb their senses partying until 4 a.m. wasting the money they just spent sixty+ hours in the week earning. That or they sit in front ofthe TV, slowly letting their life slip by.” Instead, the key is to surround yourself with people who have similar goals, ambitions, and values as you.
As you continue to grow your success, inevitably, the people around you will begin to change. After speaking to many successful people about this topic, it seems to be a fact of life that those close to you before your success may not always be there for you afterward. It’s a hard reality, but it happens, so prepare for it. Anyway, maybe you’re wondering how you can begin to grow your circle and surround yourself with like-minded people. How can you get started?
First, there are many Facebook groups and forums out there that you can join. This is a great low/no-cost option and is the best place to start. Find a group that fits your ethos, filled with people like you, and join in. Participate in the conversations, don’t simply become a “lurker” who reads the posts and never interacts. Getting involved will better your chances of success, become someone who takes action. This means you need to add value, everyone in any phase of life can add value somehow. Don’t simply take without giving and don’t spam or pitch, that’s just rude and a “dick move.”
Next, attend in-person events and seminars. These places are great opportunities to connect with others and network. The best advice is to simply be yourself and have real, organic conversations, and try something new! For instance, when Meredith was trying to grow his copywriting business, he didn’t go to copywriting events, he went to fitness events. By starting genuine conversations, he picked up a “shit ton” of business with zero pitching or effort.
Finally, invest in others. This simply means investing in a coach or mentor. If you’re looking to level-up your skills, having a coach, even for just a few months, can help you get over a particular hurdle and get to the next step. Mentors, however, are those who stay with you for longer periods of time. Someone who has extensive experience in the field you are in and can be there to guide you when needed. It’s important to remember that no one becomes successful on their own, like raising a kid, it takes a village. Investing your time and maybe some money will show your coaches and mentors that you respect their time and abilities. In return, they’ll teach you the skills you need and open you up to their massive, powerful network. So get up, get out, meet people, and get the hell off Facebook.
Chapter 7: Final Summary
When it comes to success, the one thing to remember is that no one is special. Dan Meredith isn’t special and neither are you. Everyone is simply human with similar wants, needs, and desires. What you do have, however, is uniqueness. Now, you may have ideas and that won’t make you unique, everyone has ideas. What will make you unique is taking that idea and turning it into a reality. But how? “By doing the fucking work.” Meredith didn’t see a change in his life until he made sacrifices in his life, invested in his education, skills, and network, and put time in every single day, and never quit. That’s when the “ball started rolling.” By following the advice of Dan Meredith, you too can experience similar success either in life or business. So in the words of Meredith, “fuck the excuses, the nonsense, the critics, the status quo, and being average.” Embrace life, love work, have a dream, and lastly... BE AWESOME.