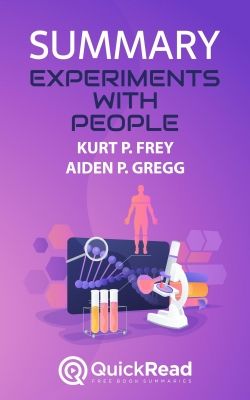 "Experiments With People" Summary
Font resize:
Summary by Alyssa Burnette. Audiobook narrated by Alex Smith
Introduction
Are you familiar with the Stanford Prison Experiment? Or the Little Albert Experiment? How about the infamous Milgram Experiment? Although these three experiments differed greatly in their natures and methodology, they have a few core things in common. For starters, they were all famous experiments involving people that were conducted during the twentieth century. Each of these experiments also implemented some ethically questionable research methods and revealed some disturbing truths about human nature.
However, these experiments only scratch the surface of the wide variety of studies that have been conducted using human subjects. And while some, like the aforementioned experiments, have yielded pretty scary results, others simply provide us with some intriguing information about what makes us tick. Ready to take an up-close (and maybe uncomfortable!) look at the deeper recesses of the human psyche? Let’s dive in!
Chapter 1: What the Milgram Experiment Teaches us About Obedience to Authority
The Milgram Experiment was conducted by a social psychologist named Stanley Milgram who was practicing during the 1960s. If you’re familiar with a bit of World War I and World War II history, then you know that the Nuremberg War Criminal trials were in full swing during this time. These trials were conducted to assess the guilt of Nazis who had been captured when the Allies defeated Hitler. Because these individuals had assisted with the Holocaust, working with Hitler to orchestrate a mass genocide and perpetrate multiple crimes against humanity, their guilt was considered almost unquestionable. In their defense, however, the criminals argued that they weren’t bad people and that they wouldn’t have attempted to kill millions on their own. Rather, they argued, they were simply following orders.
Milgram was shocked and angered by this argument and he wanted to examine its validity by conducting a psychological experiment. He wanted to know if there could possibly be a grain of truth to the Nazis’ defense and if it was possible that they really were brainwashed by a sense of obedience to authority. So, in July of 1961 — a year after the trial and execution of Nazi war criminal Adolph Eichmann — Milgram decided to construct an experiment that would somewhat simulate the conditions experienced by Nazi officers who were “just following orders” to torture their fellow human beings. Here’s how it worked. Milgram started by sending out a call for participants in local newspapers, inviting men to serve as test subjects in a psychological experiment being conducted at Yale University. The experiment was structured in the following fashion: