by Jordan B. Peterson
in Philosophy
27-minute read
Audio available 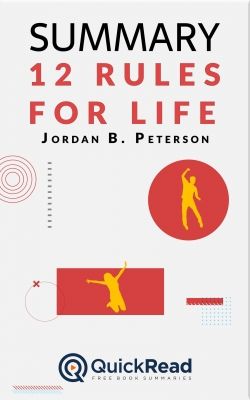 Advertised as an antidote to chaos, 12 Rules for Life (2018) assesses humanity’s most pressing concerns through the ages and compiles their solutions in this handy self-help book. Drawing on psychology, religion, philosophy, literature, and personal experience, author Jordan B. Peterson seeks to eliminate life’s chaos and confusion through the compilation of 12 simple rules that address the deepest questions of humanity. Challenging such questions as, “Why do bad things happen to good people?” and “Why isn’t life fair?” Peterson crafts a solution to truly living our best lives through adherence to his twelve consistent principles.
--:--
--:--
Download our free app:
Download the book summary:
Download MP3
Download PDF

"12 Rules for Life" Summary
Font resize:
Summary by Alyssa Burnette. Audiobook narrated by Alex Smith
Introduction
Wouldn’t it be great if someone handed us a guide which explained very clearly what the rules of life were? Wouldn’t that save us so much time and guesswork in trying to figure them out? Well, Jordan B. Peterson believes that a simple handbook of rules for life exists (at least now that he’s written it!) and there are only twelve of them. This summary will take you through Peterson’s rules for living your best life and teach you some unexpected facts along the way. Through the course of this summary, you’ll learn: